The place where I live is indescribable.  God truly has amazing creativity and imagination.  I’ve been here in American Samoa for over six months, and I never tire of seeing the ocean. 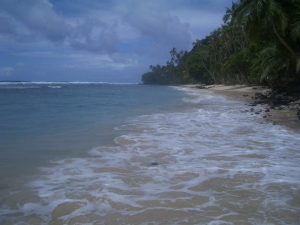 We’ve had Spring Break this week which seems somewhat comical considering that it’s rarely spring-like weather here.  I joke that I’m still waiting for August to end, and I arrived here on the 6th of September. ha!  Despite the VERY warm weather, there have been plenty of times when I’ve seen Samoans wearing sweaters, hoodies, and even an occasional winter coat.  (If only I had had my camera ready for the little girl I saw wearing it.)  Their bodies are so accustomed to the temperature remaining at about 85 degrees Fahrenheit that even 79 degrees feels cool.

That reminds me of another small “difference” here that seems to be a HUGE difference.  The speed limit is 25 mph in most places on this island.  Once, while riding somewhere with some of the others who also come from “the mainland”, it felt like we were going faster than normal.  I looked, and we were going 30 mph.  In the States, we do not normally notice the subtle difference between 25 and 30.  Here, it was almost like night and day.

Perspective plays a big role in things, much more than we realize.  Living where there are no stoplights, no streets with more than one lane headed in each direction, no mailboxes, no mailmen, no UPS or FedEX, no WalMart, and yet there are two 24 hour McDonalds… brings a whole new meaning to perspective.  And, that’s not even mentioning the night sky (with a whole new set of stars to gaze upon) or the bright sun or the roosters that crow at 11:30 p.m. and 11:30 a.m. or the dogs that roam free or the lack of horses, cows, squirrels, blue jays, cardinals, and robins.

I could write so much more, and perhaps at some point I will.  A friend on Facebook recommends I do it now.  I’d like to take his advice.  I tend to be my own critic and (gasp!) worry that I’ll write the wrong thing or say too much or too little or …

Perspective.  How do you perceive the things around you?

Mom Knows It All from Val's Kitchen